Many toys and toy line similar to the Nerfuls have been released. Some of these actually hit stores at almost the same exact time as the Nerfuls, sometimes creating confusion when a person is sorting through their childhood collections. Here's a look at some of those toy lines which most closely resemble the Nerfuls. 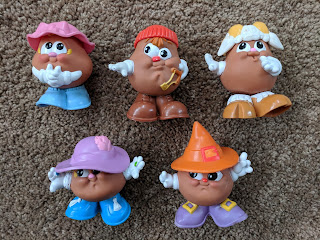 The Potato Head Kids was a spin-off toy line from Mr. Potato Head made by Hasbro/Playskool starting in 1985. It is cited by many as the toy line which killed off the Nerfuls. Probably because of its instant brand recognition and a huge push from Hasbro the Potato Head Kids was able to do everything that Nerfuls did, plus most of what Nerfuls had planned to do. There were multiple waves, multiple fast food promotions, Playsets, Vehicles, a board game, an animated TV show, and I'm sure other things that I don't know about. 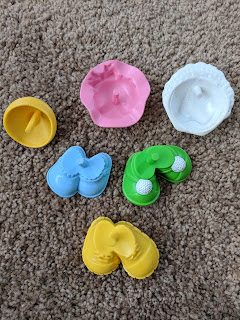 Unlike Nerfuls the central portion of the toy represented the torso with arms, and not just a head. This meant the bottom portion on a Potato Head Kid is just feet. Both the hat and the feet of a Potato Head Kid are help on with a peg which is inserted into the appropriate hole in the torso. As a result of this design difference, while they are roughly the same size, it is difficult to confuse a Potato Head piece with a Nerfuls piece, however they do sometimes end up in lots together. 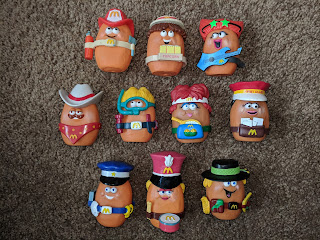 In my opinion the greatest toys ever given away by McDonalds, the McNugget Buddies were based on the adorable little puppet McNuggets that started appearing in McDonalds commercials in the early to mid 80's. The first series of buddies, shown above, were released in 1988, just after the Nerfuls had stopped being produced. Like the Nerfuls, each figure is a 3-piece toy with removeable hat/hair pieces. Because the toys are of a similar size and the hats basically just sat on the buddies' heads, McNugget Buddies parts do occasionally get mixed in with Nerfuls lots online, particularly the cowboy hat for some reason. 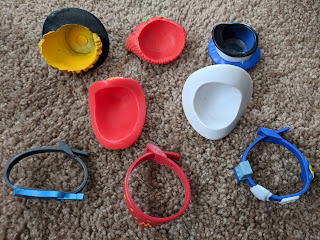